MEN WHO WROTE THE HISTORY

1969, at parade to celebrate the Second Independence Anniversary of Biafra; General Efiong is fourth from left; General Ojukwu, Head of State, is fifth from left

The “Biafran” Cabinet at a Church service, on the extreme right is the late Sir Louis Mbanefo- former Supreme Court Judge and Judge of the World Court, who severally advised Ojukwu to negotiate a dignified end- to no avail and who was then left – alongside Phillip Effiong to negotiate surrender, after Ojukwu took off. 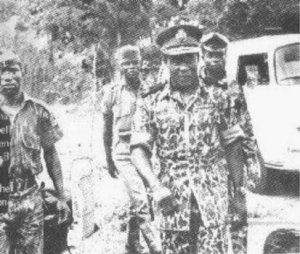 1969, Major General Philip Efiong returning from a visit to a refugee camp in Nto Edino in present-day Akwa Ibom State
The Charismatic Major Patrick Chukwuma Kaduna Nzeogwu. . On July 29, 1967, was he was trapped in an ambush near Nsukka while conducting a night reconnaissance operation against federal troops of the 21st battalion under Captain Mohammed Inua Wushishi. He was killed in action and his corpse was subsequently identified. In order to speed up the national reconciliation effort, orders were given by Major General Yakubu Gowon for him to be buried with full military honours at the military cemetery in Kaduna. However, by the time the corpse arrived in Kaduna, it had been mutilated by unknown persons and his eyes gouged out. A photograph of Nzeogwu’s corpse is available at the National Archives in Kaduna.
Major Hassan Katsina. Katsina became the first Military Governor of the Northern Region
1968 – Adekunle “The Black Scorpion” during Operation OAU
“I want to see no Red Cross, no Caritas, no World Council of Churches, no Pope, no missionary and no UN delegation. I want to prevent even one Ibo from having even one piece to eat before their capitulation. We shoot at everything that moves and when our troops march into the centre of Ibo territory, we shoot at everything even at things that do not move, 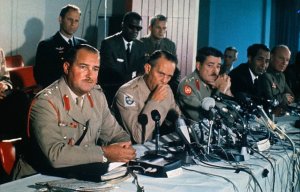 16 Jan 1970, Lagos, Nigeria — Lagos, Nigeria: Three members of an International Team of Observers reporting in Lagos, right to left, Col. Douglas Cairns of Great Britain; Yngye Berlund of Sweden; and Brig. John Drewery of Canada. As part of an eight-man team that visited the war zones, they said they neither saw nor heard of any evidence of genocide in the eastern Region Nigeria, formerly Biafra.
– Image by Bettmann/CORBIS
Aba Hospital 1968…victims of the NAF Napalm Strike on the Hospital 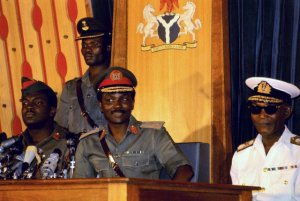 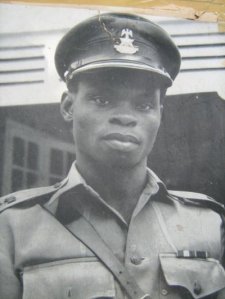 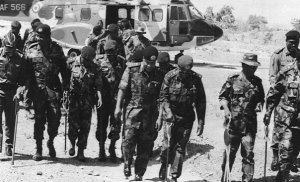 IBB: Operation “Iron Fist”
At Independence in 1960, Dr. Ibiam was appointed the Governor of former Eastern Region, the position which he held until the 1966 bloody coup dâ€™etat. His famous quote to the Crown was as such â€œIn the circumstance, Your Majesty, I no longer wish to wear the garb of the British Knighthood. British fair play, British justice, and the Englishman’s word of honor which Biafra loved so much and cherished have become meaningless to Biafrans in general and to me in particular. Christian Britain has shamelessly let down Christian Biafra”
Obasanjo with Effiong on the last day of the war.
Murutala Mohammed…..a controversial figure in the war he was best known for escaping death the Abagana Ambush On March 31, 1968, mass executions in Asaba and the sacking of Banks in Benin..before rising to become a very popular President and playing a major role in dismantling Apartheid in the RSA. 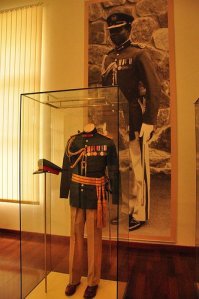 Shehu Musa Yar’Adua
Heads shaved..men on their first day in the Biafran Army.

From “The Nigerian Civil War” by John de St. Jorre (Hodder & Stoughton, 1972)
Rolf Steiner Head and founder of the Biafran Kommando Unit.
Rolf Steiner- the ex-foreign legionnaire, brutal, mean dog of war and a complete joke of a military commander, who thankfully left in disgrace, but still got paid for his services. His colleague Bob Goosens- a South African, another mercena…ry was killed in action. Gustav Von Rosen on the other hand was an old school Knight who spent a lot of his life fighting for the underdog, even though related to Herman Goering , he fought the Nazis in Finland, also fought the Italians in Ethiopia, he converted small minicon aeroplanes into combat aircraft, by attaching ammo disposal mechanism. He was Dag Hammarskjold’s (former UN Secretary Gen) pilot,who was fortunately taken ill on the day Hammarskjold died when his plane was brought down.
General Staff Officer, Grade 1 in the Nigerian Army, and later, a Lieutenant-Colonel,Patrick Anwunah was the Principal Staff Officer and Chief of Logistics in the Biafran Army. Like General Major General Alexander A. Madiebo and Major Timothy Onwuategwu, he also went to Government College Umuahia.
Nigeria’s Best Soldier during the war…The famous Colonel Utuk AKA Etuk:
….and on the back of a Benz….Pen is put to paper and Peace is Made.
On May 22, 1969, the Babies of Biafra launched their first attack against Nigeria. The Babies were a fleet of 5 civilian single-engine SAAB aircraft outfitted with unguided rocket launchers. They were going up against an air force composed of MIGs and Ilyushin bombers, flown by English, South African and Egyptian mercenaries. Their leader was Carl Gustaf von Rosen, a Swede who was Herman Goering’s nephew-in-law.

Biafran child soldier said to be about 13, and one of the Onumonus, and former French Legionnaire Rolf Steiner awaiting orders.
Rolf Steiner circa 1968. Unlike many Mercs used by both sides, Steiner took Biafran Citizenship and even married an Igbo. However he would fall out of grace with the many Biafran Generals eventually leading to his expulsion.
Biafran Troops with Welsh Merc Taffy Williams celebrating a victory. Taffy Willams would be the main character Forsyth would use for his Book “The Dogs of War”.

The full and complete version of the Aburi Acoord’s published here..

American pilot Ron Archer, en route to Biafra on an ammunition supply run for the Biafran army [Circa 1968].
– Biafra will ever live not as a dream, but as the crystalization of the cherished hopes of a people, who see to the establishment of this territory, a last hope for peace and security. – Chukwuemeka Odumegwu Ojukwu, 15th January, 1970.

This site uses Akismet to reduce spam. Learn how your comment data is processed.

GLOBAL CONSPIRACY & GENOCIDE AGAINST THE INDIGENOUS PEOPLE OF BIAFRA: DIPLOMATIC WAR DOCUMENTS 1967-1970 – (50TH ANNIVERSARY, Jan. 15 1970, OVER 6 MILLION BIAFRANS KILLED!) “MAKE NO MISTAKE ABOUT IT, THIS ‘WAR’ IS ONLY AT THE BEGINNING STAGES.” AT THE END, THERE WILL BE “NO NIGERIA.”

GLOBAL CONSPIRACY & GENOCIDE AGAINST THE INDIGENOUS PEOPLE OF BIAFRA: WAR RELIEF EFFORT 1967-1970 – (50TH ANNIVERSARY, Jan. 15 1970, OVER 6 MILLION BIAFRANS KILLED!) “MAKE NO MISTAKE ABOUT IT, THIS ‘WAR’ IS ONLY AT THE BEGINNING STAGES.” AT THE END, THERE WILL BE “NO NIGERIA.”